One sure way to elicit an “OK boomer” comment from anyone under age 50 is to quote the comic strip, Pogo. In the War of 1812, naval commander Oliver Hazard Perry defeated the British navy in the Battle of Lake Erie and messaged the military leadership “We have met the enemy and they are ours”. In 1970, Pogo creator, Walt Kelly, satirically paraphrased Perry’s message in an Earth Day commentary about pollution by having his character say “We have met the enemy and he is us”. A half century later, Pogo’s statement could also be applied to prioritizing COVID-19 vaccinations: “We have met the COVID special interest groups and they is us”.

When it comes to the COVID vaccine, there are two types of people, those who are not going to get it because they fear it and those who want it as well as believe that they should get it before anyone else.

When the vaccines were first authorized for use by the FDA in December 2020, each state was directed to make its own criteria for which groups of people would receive the vaccine first. The CDC and the FDA provided general recommendations but this was really a “state’s rights” issue. Most states initially approved vaccinating healthcare workers, followed by different at-risk groups. 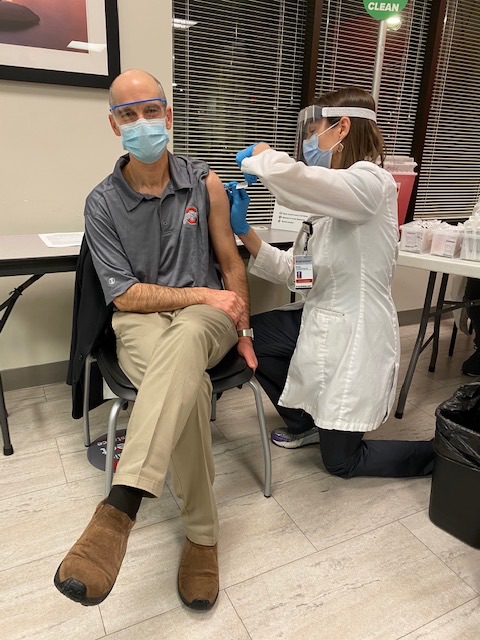 On the surface, vaccinating healthcare workers made perfect sense – these are the people who were risking their health and their life exposing themselves by caring for patients infected with COVID. Furthermore, we need healthy healthcare workers to take care of patients hospitalized with COVID. But should all healthcare workers be prioritized ahead of the rest of the population? Across the country, hospitals developed a process for ranking their employees for who should get the vaccines in what order. Some categories of healthcare workers were easy, for example, emergency department and intensive care unit nurses. But after that, things get a bit controversial.

What about the nursing unit clerk who does not have direct contact with COVID patients but is working at a desk down the hall from sick patients? What about the primary care physician who does not care for patients in the hospital but might encounter a patient with undiagnosed COVID coming into the office with sinusitis symptoms? What about the facilities worker who might be called to do a repair in a hospital room with a COVID patient in it? What about the billing office staff who are working from home but who are essential to keeping the hospital open and running? What about healthcare professions students who are not permitted by their school administration to care for COVID patients but could encounter a patient with asymptomatic COVID infection during a clinical rotation??

Throughout the country, each of these groups of healthcare workers started lobbying that they should receive the vaccine or that they should be moved up on the prioritization list. In January, media coverage exposed hospital board members, hospital staff working from home, and health profession students who were not providing direct patient care to COVID patients. This resulted in outrage by state legislators and governors across the nation who directed that vaccine prioritization move to non-healthcare worker groups.

Many states next prioritized nursing home residents and workers. This made a lot of sense because these patients were not only at high risk of being hospitalized or dying if they got infected but because they live in confined areas close to a lot of other nursing home residents, they were more likely to get infected than people who lived independently in their own home and could isolate themselves. But what about people who live in other congregate settings such as college dorms, homeless shelters, and prisons? At the beginning of the pandemic, many prisons in the United States experienced outbreaks of COVID with large numbers of inmates and guards becoming infected. In several states, these outbreaks among prisoners were of sufficient magnitude to overwhelm hospitals to the point that it became difficult to provide care to regular citizens. In response to this experience, some states prioritized prisoners and the homeless for getting vaccinated resulting in outrage by regular tax-paying citizens.

Another group of citizens to be prioritized  were “essential workers”. Depending on your vantage point, more than half of employed people in the U.S. are “essential”. Where do you draw the line between grocery workers, restaurant workers, members of the military, farmers, teachers, government workers, and manufacturing workers?

The least controversial prioritization grouping was by age. The probability of being hospitalized or dying if a person becomes infected with COVID is directly related to that persons age. People < 18 years old have an exceedingly low COVID hospitalization rate and mortality rate. People > 80 years old have a 25% COVID mortality rate. By using age as a criteria, lobbying is eliminated – a lobbying group for people 60-65 years old is not going to demand that their constituency be vaccinated before people 70-75 years old. It is easy to provide proof of eligibility – all you need to do is show your driver’s license or other identification, you don’t need a letter from your doctor stating that you are 68 years old.

From a societal standpoint, vaccine prioritization should be guided by:

The first two groups of people are the same – those who create the greatest expense are those who get hospitalized and these are the people who are most likely to die. Age is clearly a leading predictor of death and hospitalization. People older than age 85 years infected with COVID are 80 times more likely to be hospitalized and nearly 8,000 times more likely to die than people under age 18 infected with COVID.The table below from the Centers for Disease Control shows the risk of hospitalization and death from COVID infection by age.

Other strong risk factors for hospitalization and death from COVID-19 are obesity, chronic kidney disease, diabetes, and hypertension. Because there are varying degrees of obesity, hypertension, kidney disease, and diabetes, it becomes very difficult to decide where to draw the line by BMI, systolic blood pressure, creatinine level, and hemoglobin A1C.

Ultimately, nearly all of us are in a COVID vaccine special interest group and can think of some reason or another for why we should be vaccinated before the rest of the population. In many ways, this is better than the alternative of no one wanting to get vaccinated. Fortunately, the number of new cases of COVID is falling and the amount of vaccine is increasing, so soon, everyone who wants a vaccine will be able to get one. Until then, maybe we should just keep things simple and use age alone as the criteria for prioritizing vaccination.