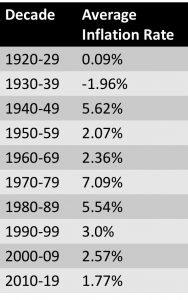 We have been living in an era of incredibly low inflation rates. In fact, for the past decade, the inflation rate has been the lowest in U.S. history since the 1930’s and has averaged only 1.77% per year since 2010. But economic history teaches us that inflation rates will inevitably rise in the future and when they do, that rise will be especially harmful to physicians.

In the year that I started medical school, 1980, the inflation rate was an astounding 13.5%! Along with high inflation came high interest rates – in April 1980, the average 30-year fixed mortgage rate was more than 16%. Inflation means that the cost of goods and services goes up. Inflation is often measured by the consumer price index, which is derived from the cost of 8,018 items weighted for the amount of each of those items purchased by consumers the previous month. Inflation is heterogeneous in that the cost of some items will rise more than other items thus affecting some groups of people differently. For example, if the cost of gasoline preferentially increases, then the independent long-haul trucker will be affected more than the person who works from home and does not drive a car. Alternatively, if the cost of food preferentially increases, then the family with 4 teenagers will be affected more than the empty nesters who live next door.

Overall, when the cost of goods and services increase, the average worker’s wage generally increases in tandem. The group that gets hurt the worst with inflation is people with a fixed income, for example, retirees living off of pensions or Social Security. But because of the the way healthcare financing works in the United States, doctors are also ultimately on a fixed income. 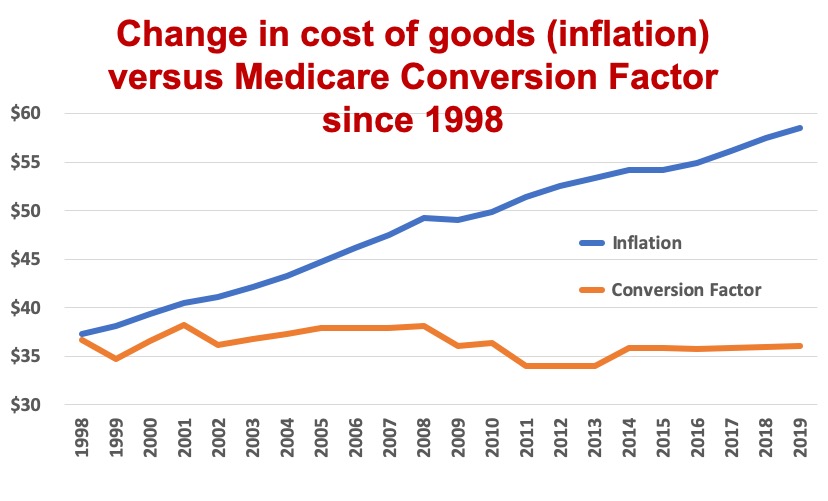 The reason is that about 64% of U.S. healthcare spending comes from governmental sources – mainly Medicare, Medicaid, the Veterans Administration, and CHIP (Children’s Health Insurance Program). Physician payments for most of these governmental sources are tied to the Medicare Conversion Factor which is the amount of money that doctors get paid per RVU (relative value unit). When inflation rises, the Medicare Conversion Factor does not keep up. In the graph, we can see the effect of inflation compared to the change in the Medicare Conversion Factor since 1998. So, for example, in 1998, the conversion factor was $36.69/RVU and remained relatively stagnant for the next 20 years so that by 2019, the conversion factor was $36.04/RVU. On the other hand, goods and services that cost $36.69 in 1998 cost $58.46 in 2019 due to increases in the consumer price index (inflation). In other words, doctors get paid about the same to do a given medical service in 2019 as they did in 1998 but the cost of all of the goods and services that doctors purchase has increased by 62%!

Despite the static conversion factor, doctor’s incomes have increased since 1998 and kept up with inflation. There are three main reasons for this. (1) There has been a shift toward optimizing physician work efficiency by improving office workflows and improving hospital throughput; this has resulted in physicians being able to increase patient volumes. (2) Computerization of medical practice has also improved efficiency and physician work output; this has also resulted in increased patient volumes per workday. (3) There has been a shift from physicians being self-employed to being hospital-employed with hospitals now subsidizing physician salaries.

These three things have allowed physician income to rise but will they be able to keep up with inflation in the future? Most physicians would say that they are currently at the limit of the number of outpatients that they can see in a day. Most hospitalists would say that they are at the limit of the number of patients they can take care of during a hospital shift. Most hospitals have streamlined operating room throughput so that surgeons would say that they cannot do many more surgical operations on a given day. In other words, gains from increased operational efficiency of medical practice cannot be further increased in the future. And that means that in the future, cost of living increases in physician incomes will have to come from greater subsidization rather than greater revenue from clinical care.

Inevitably, with subsidization comes loss of autonomy. And if/when the inflation rate increases, the degree of subsidization will likely increase since there is no reason to expect that the Medicare Conversion Factor is going to increase based on the precedent of the last 20 years. Fortunately, there are a few things physicians can do to protect themselves from inflation:

It has been nearly 30 years since the annual inflation rate exceeded 4% and consequently most physicians have never experienced the effect of high inflation rates. When it comes to inflation in the future, the saying “Hope for the best but prepare for the worst” is good advice for physicians. In the event of unexpectedly high inflation, physicians would likely see a decline in their relative income compared to other professionals.