When the inflation rate rises, different professions are affected differently. One of the most vulnerable is the private practice physician and the recent rise in inflation may just be enough to close many private practices and force those physicians to become hospital-employed.

In a previous post in 2019, I laid out the argument that all physicians should be afraid of inflation. At that time, inflation was just a hypothetical possibility – something that would likely happen at some time in the remote future. But now, inflation is a reality and it is causing financial pressures on physician practices.

Inflation results when there is an increase in the cost of goods. Some inflation is good and is a sign of strong consumer demand, growing worker income, and low unemployment rates. The ideal inflation rate is around 2% per year. But when the inflation rate is too high, consumers cannot afford to purchase the same amount of goods and services. As a result, in a free market, workers will demand higher wages in order to maintain a constant purchasing power. However, people on fixed incomes lose their purchasing power since their incomes cannot keep pace with inflation. Although retirees are the group of people who are most often mentioned as being harmed by high inflation, physicians in private practice are also essentially on fixed incomes.

Physician reimbursement is not a free market system. When inflation affects a restaurant, a grocery, or a retail store, that business can increase prices overnight in order to keep up with expenses. However, physicians cannot increase the amount that they get paid. Physician income from professional fees primarily comes from two sources: the government (through Medicare and Medicaid) and commercial health insurance companies. The U.S. Congress sets Medicare payments each year for every physician service. Commercial insurance companies negotiate contracts with physicians that typically set the fees for several years in the future. Most physicians will have a “fee schedule” that allows them to change their charged amount for any given service. The charged amount on the fee schedule for any given service is set at an price higher than their highest paying commercial insurance contract. However, for all practical purposes, no one pays the amount of the fee schedule since it only applies to uninsured patients and most of the uninsured negotiate reduced amounts on an individual basis because of financial hardship.

Medicare payments do not keep up with inflation 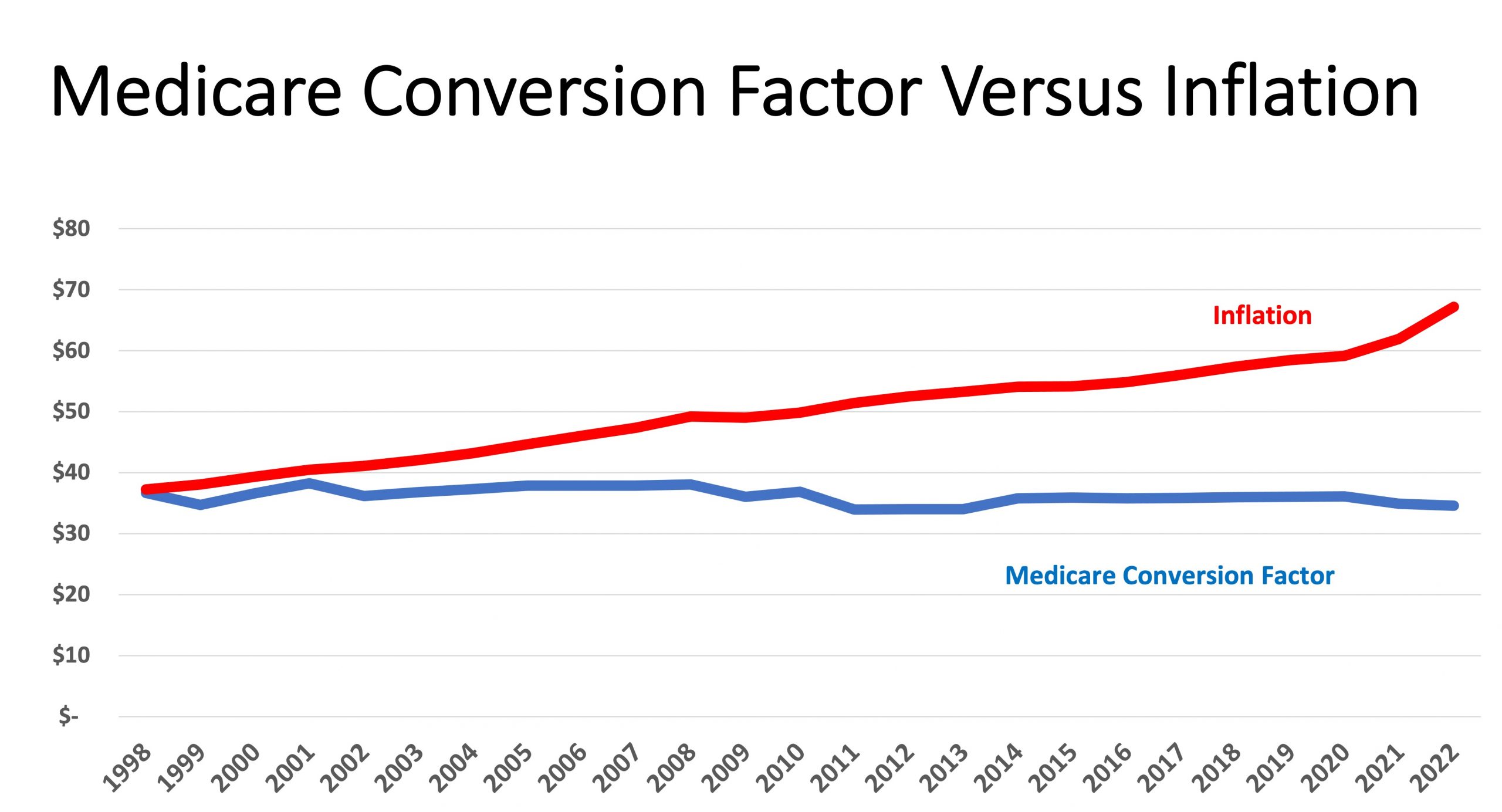 The Medicare RVU schedule varies from year to year depending on what types of services Medicare wants to promote. Over the past two decades, Medicare has been tending toward emphasizing primary care and de-emphasizing procedure-based specialties. Therefore, Medicare has increased the RVUs for outpatient office visits and reduced the RVUs for procedures. However, neither office visit nor procedure reimbursement has kept up with inflation. The graph below compares the reimbursement for a level 4 new outpatient visit (CPT 99204) in Ohio from 2000 to 2022 compared to the effect of inflation during this same time period. During this time, a new outpatient visit lost 25% of its value due to inflation: 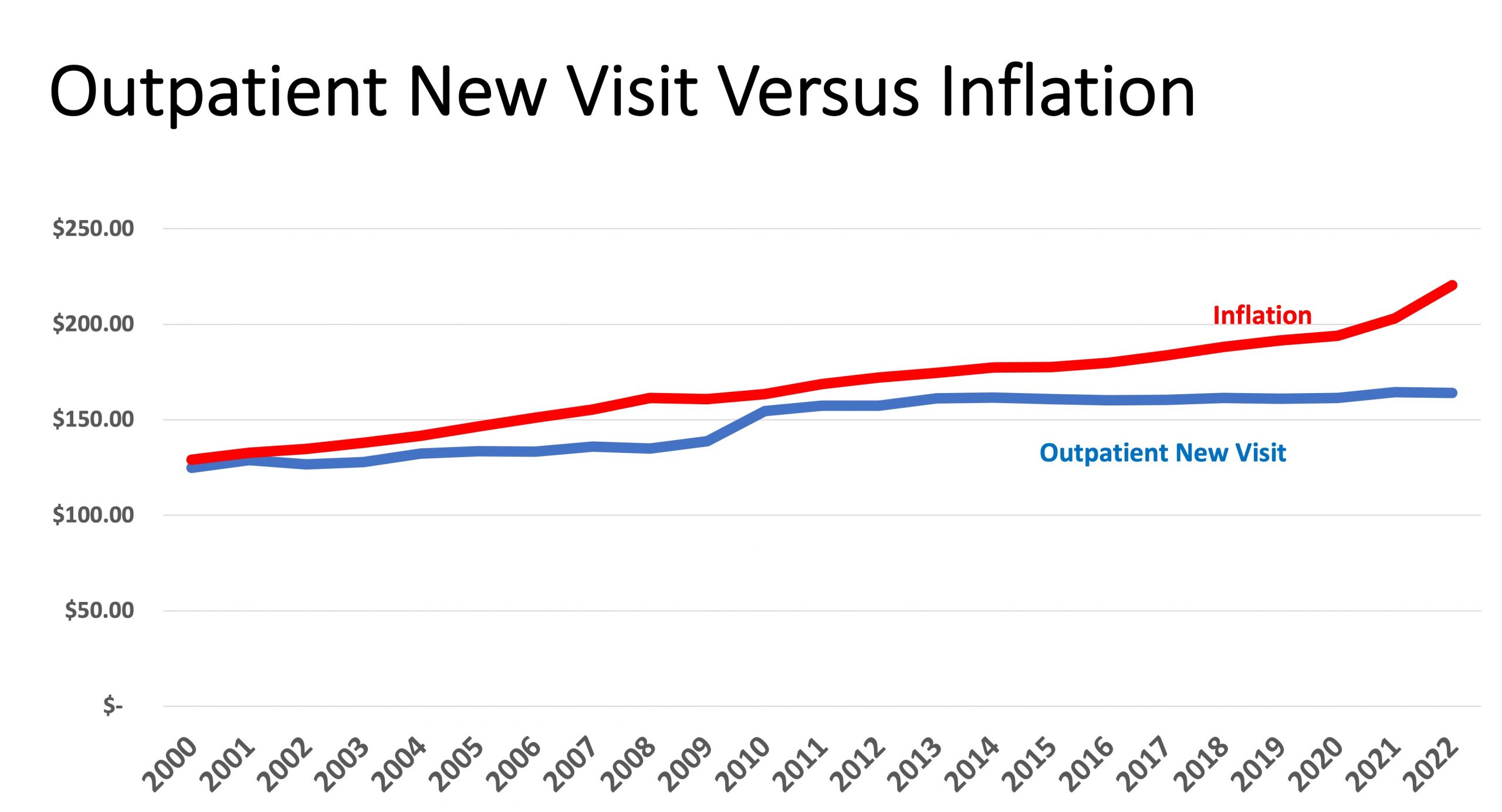 In order to increase the RVUs for outpatient visits, Medicare had to take those RVUs from other service and consequently, procedure reimbursement has lost even more value. Two common procedures performed by outpatient physicians are knee injections (CPT 20610) and EKGs (CPT 93000). Between 2000 and 2022, reimbursement for performing knee injection fell from $70.53 to $63.79. When adjusted for inflation, this represents a 49% loss of value. 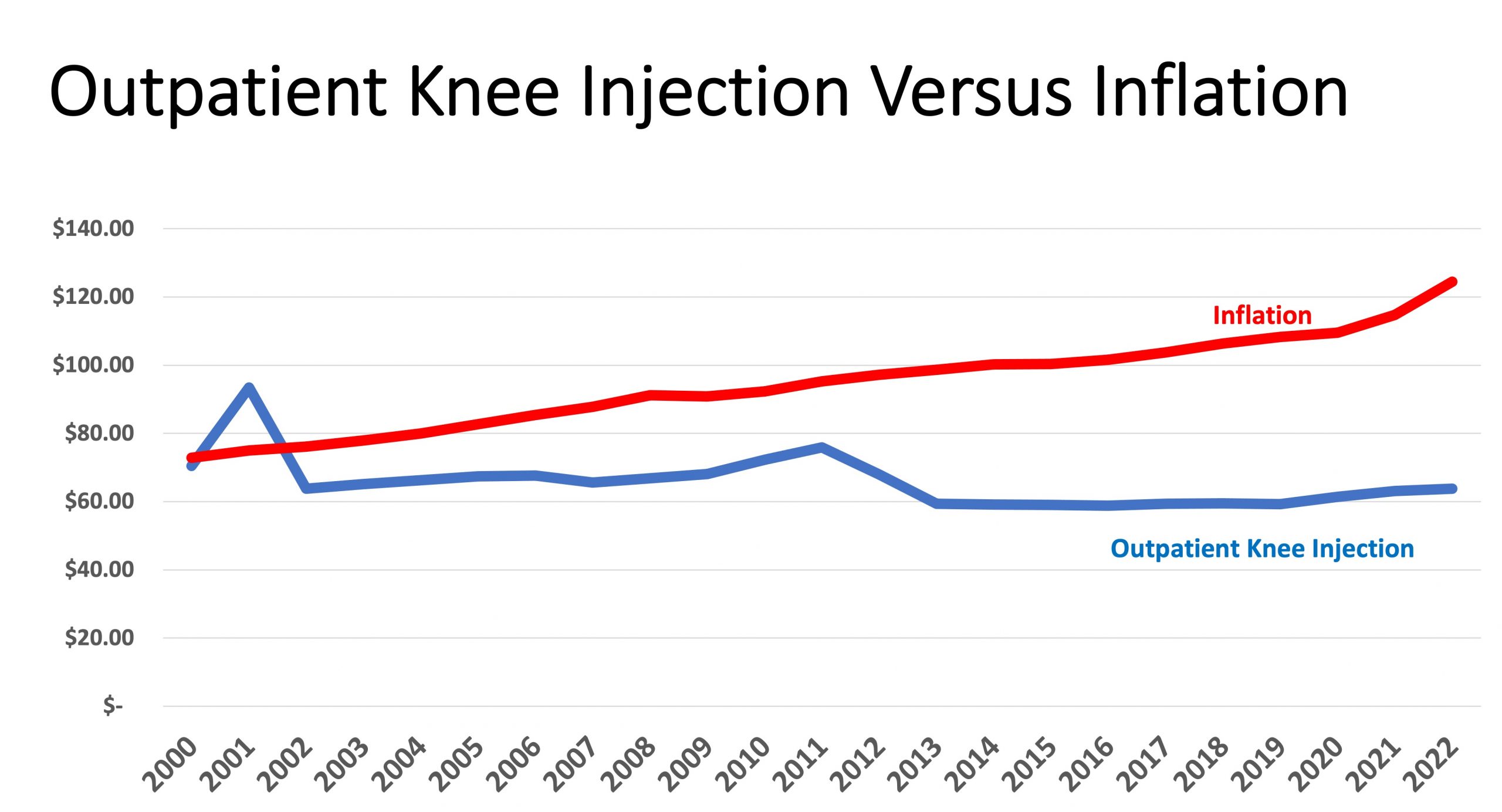 EKGs lost even more value. Between 2000 and 2022, reimbursement for performing an EKG with interpretation fell from $27.63 to $13.91. When adjusted for inflation, this represents a 72% loss of value. 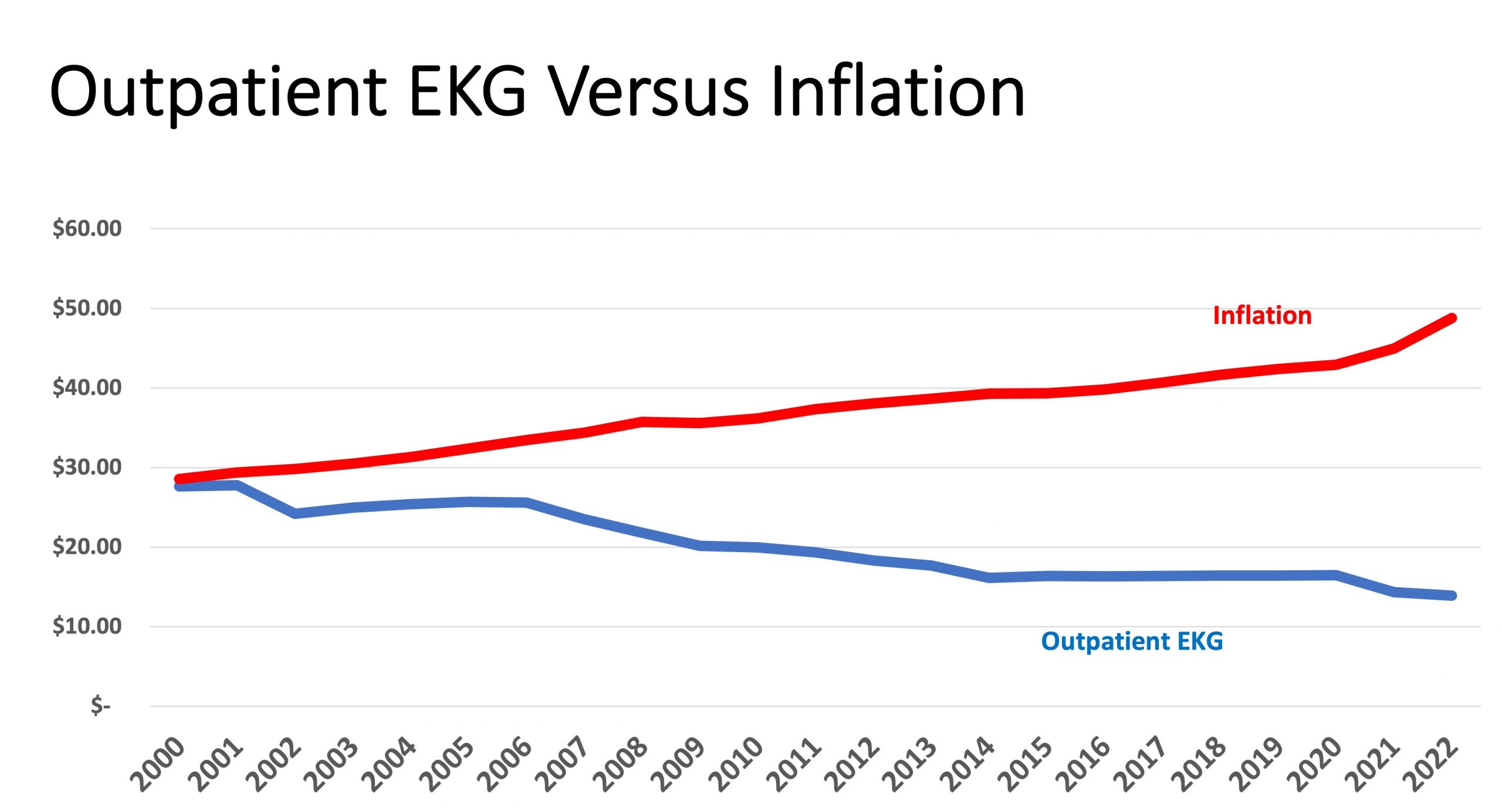 At the same time that inflation has eroded the value of Medicare reimbursement, physician practice overhead expenses keep going up. Doctors have to pay more for office rent, utilities, and office staff salaries due to inflation. As a consequence, what many physicians take home at the end of the day in income for performing outpatient services has fallen.

So, what can the private practice physician do?

With inflation accelerating overhead expenses and with Medicare payments not keeping up with inflation, there are only a limited number of options for the private practice physician who depends on receipts from clinical practice to stay in business.

2022 is a very bad year for physicians in private practice

Over the past 2 years, the Medicare conversion rate fell from $36.09 per RVU for 2020 to $34.61 for 2022. In March 2022, the annual inflation rate reached 8.5%, the highest rate in 40 years. For many physicians in private practice who were barely getting by a year ago, this surge in the inflation rate combined with a reduction in this year’s Medicare conversion rate will be too much to financially bear.

In a free market economy, quality is the most important determinate of cost – the best chef commands the highest wage and the best architect commands the highest fee. Since the creation of Medicare in 1965, physician practices become less and less susceptible to free market forces. The inexperienced physician and the physician with 30 years of experience get paid exactly the same by Medicare. Similarly, the worst physician in the community gets paid by Medicare the same as the best physician. The recent increase in inflation will likely force many physicians away from private practice employment models and move medicine even further from a free market workforce. We are spectators to the extinction of the private medical practice.