What is a Roth IRA?

With a Roth IRA, you pay income taxes on money you earn today and then put that money in the Roth IRA. That money then grows without you having to pay interest, dividend, or capital gains taxes each year. When you retire, you take that money out to spend in retirement and you do not pay any taxes on the withdrawals. If your taxable income in 2021 is less than $125,000 (filing single) or less than $198,000 (filing jointly), you can contribute money you earned directly to a Roth IRA after paying 2021 taxes on that income. If your taxable income is higher than those limits, you can still contribute to a Roth IRA but you cannot do it directly. Instead, you have to do a “conversion” where you first contribute to a traditional IRA and then convert the money in that traditional IRA into a Roth IRA. This is sometimes called a backdoor Roth IRA. There is a limit to the amount that you can contribute each year: $6,000 if you are under age 50 years old or $7,000 if you are over 50.

OK, in reality there are a lot more than 4 sources of money that most retirees can draw from, but for most people, retirement income can be divided into four general categories:

Why you need a Roth IRA

There are two ways that a Roth IRA can save you money on taxes. First, if you have disposable income after paying this year’s income tax and you want to invest for retirement, you can either put it in a post-tax investment (for example, by buying shares of a mutual fund) or you can put it in a Roth IRA (either directly or by doing a Roth IRA conversion, depending on your taxable income). If you put it in a post-tax investment, then you are going to be taxed every year on the interest and dividends and then when you withdraw the money in retirement, you are going to be taxed on the capital gains – over the years, that will add up to a lot of taxes. On the other hand, if you put that same money in a Roth IRA, you will never pay any taxes on interest, dividends, or capital gains. Therefore, everyone should maximize contributions to a Roth IRA before putting money in a post-tax investment for retirement purposes.

The second way a Roth IRA can save you money on taxes is by taking advantage of periodic changes in federal income tax rates. As I described in a previous post, income tax brackets are one of the most misunderstood parts of the American tax system. What is important is your effective income tax rate and not your tax bracket. The effective income tax rate will vary widely depending on how the U.S. Congress sets taxes. It is a certainty that tax rates will change every few years, largely depending on which political party is in power. Having a Roth IRA allows you to maintain a consistent annual disposable income in retirement while weathering the ups and downs of income tax rates. To demonstrate this, let’s look at the effective tax rates in 2016 versus 2020. 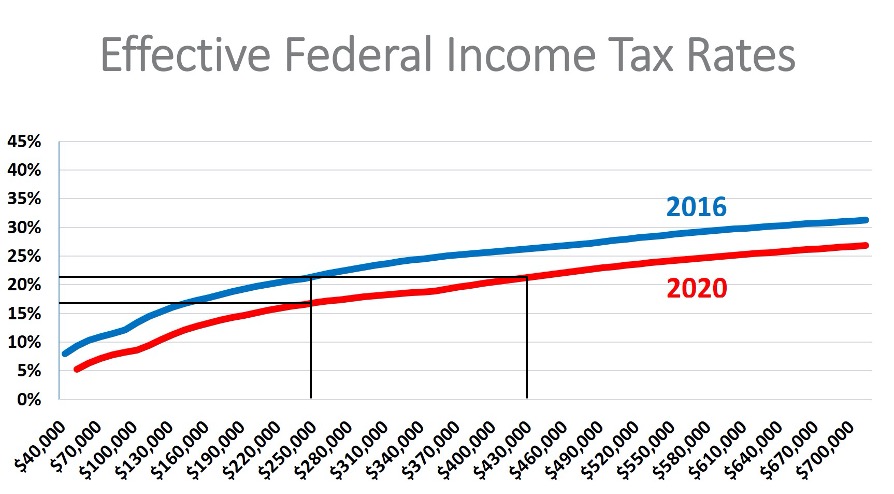 It is inevitable that federal income tax rates will go up in some years and down in others during a person’s retirement years. American taxpayers want low taxes but they also want federal services such as Social Security, Medicare, a strong military, investment in transportation & infrastructure, and perhaps in the future even national healthcare. Our political party system results in a see saw effect every few years with pressure to decrease taxes followed several years later by pressure to increase federal services. I would argue that for most people, it is impossible to predict whether their federal income tax rate will be higher or lower in any given year during retirement than it is during the years that they are working. The reality is that over the duration of their retirement years, it will likely be both. Having a Roth IRA allows you to take advantage of these inescapable swings in the effective income tax rate in order to maximize your disposable income.